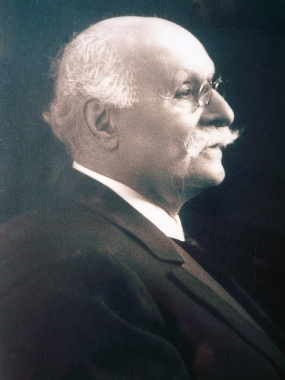 Émile Waldteufel was born in Strasbourg into an Alsatian family of musicians. His father ran a well known orchestra and his brother Léon was a violinist. When Émile was accepted at the Paris Conservatory the family moved to Paris. There, Émile studied piano. At 27 he became a court pianist and then formed his own orchestra that played at Napoleon III's court balls. After the Franco-Prussian war he continued to play at the presidential balls in the Elysée Palace. In 1874 he played in front of the future Edward VII who was enthralled with his Manolo waltz and supported him in a venture to have his music published in England, entering a long term contract with the publisher Hopwood & Crew. This was connected via Charles Coote to the Coote and Tinney's band. As a result of this connection Waldteufel's dances were played at Buckingham Palace for Queen Victoria and during this period he composed his best works. The Skaters’ Waltz for example was composed in 1882. He gave concerts all over Europe and played at the Paris Opéra balls in 1890 and 1891 and retired in 1915. Publishers in France and Germany were obliged to buy the rights for his works from Hopwood & Crew. The German publisher Litolff started an opus numbering system and created some German titles, which have ever since caused confusion. Waldteufel made concert appearances in London in 1885 and Berlin in 1889, played at the Paris Opera balls in 1890 and 1891, and retired in 1900. He wrote around 250 works, mostly waltzes, polkas, and marches. A detailed book by Andrew Lamb on the Waldteufel family was published in 1994 entitled Skaters’ Waltz.