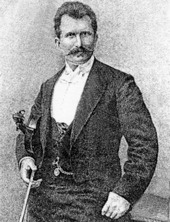 Robert Vollstedt was a German composer very much in the Viennese idiom, and was born near Hamburg in Germany. Very little is known about his musical education. As principal clarinettist in the Hamburg Opera House orchestra, he remained with them for most of his working career. He wrote a musicians manual on the clarinet.
Vollstedt has been remembered mainly for his waltz Jolly Brothers (othewise known as Jolly Fellows), which became known internationally. This was the waltz that Sousa selected to be played at the opening ceremony of the Chicago World Fair in 1893. It was amongst one of the earliest waltz shellac recordings made, and featured every year in the programme of the Boston Pops Orchestra from 1896 till 1950!  The piece was repeatedly recorded by various orchestras and bands over the years, up to Arthur Fiedler's recording with the Boston Pops in 1980. In 1933 Vollstedt’s son Siegfried was music maestro for the radio station Germania that used to broadcast from Chicago.
Vollstedt composed on piano and specialised in dance music of all types, as can be seen in the attached list of opus numbers in the drop down list. However his marches, which have been played around the world, form the bulk of the music for which he became known. They were in a style that can be described as somewhere between the very light and melodic and those for a large military band created by bandmasters such as Carl Teike. One such march, Schneidig was recorded by the Society on the Marco Polo label in the Naxos series  'Contemporaries of the Strauss Family' Vol.3. Like several noted composers of his era, he was quite well known during his lifetime, but sadly forgotten today.