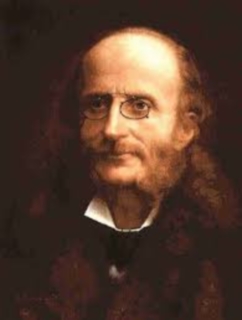 From the age of six Offenbach played the violin and cello. One of a gifted musical family, he was born in Cologne. His father decided that only Paris could offer him the tuition he needed and got him into the Paris Conservatory. After only a year he tired of this and in 1850 became conductor at the Théâtre-Français, also playing the cello at the Opéra Comique, but he was a constant prankster and got into trouble with the authorities. He was already composing and was probably one of the fastest who ever lived. He was able to compose, write out and orchestrate a whole operetta in one week. He rented his own tiny theatre called the Bouffes-Parisiens in 1855 and soon moved to a larger theatre keeping the name. Apart from many cello pieces and dance music, he had been writing a string of one-act stage works since 1839. They had wit and irreverence for which he became famous. His first great hit was the full length Orpheus in the Underworld in 1858 and was such an instant success that it played all over Europe. He created his one ballet Le Papillon in 1860 and together with his old friend Halévy as librettist, created La belle Hélène in 1864 which took Hortense Schneider to stardom. In the same year Offenbach visited Vienna and both he and Johann Strauss the Younger wrote waltzes for the Concordia Ball: Morgenblätter by Strauss and Abendblätter by Offenbach. This was followed by La vie Parisienne. In 1866 against the backdrop of a darkening Europe he wrote the Grand Duchess of Gerolstein in 1867 and in 1868 La Périchole. Many of his operettas were highly controversial and the criticism in the press only created more interest to see what the fuss was all about. His popularity grew in England, America and in France he was given the Légion d’Honneur for theatre. As the Second Empire disintegrated so did his success. During the Franco-Prussian War, Offenbach was generally unwelcome in France because of his German origin. Public taste was changing and the rising Charles Lecocq was more in touch with the mood. In 1872, Offenbach revived the Bouffes-Parisiens, and took over the Gaité theatre, but the theatre became bankrupt. He paid his debts by going on an American tour during the Centennial Celebration, where he performed at New York’s Gilmore's Gardens and the Philadelphia Centennial Exposition. Offenbach’s last work, the opera Tales of Hoffmann, was a serious stage work, but he died before its performance.